When should I worry about my child’s height?

At every well-child visit, newborn through adolescence, your pediatrician will measure your child’s height. In part this is because growth is a measure of health and well-being, but your doctor will also be tracking the rate at which your child is growing toward his or her estimated target height. This is calculated with a standardized formula so doctors have an objective measure to identify potential growth problems, called short stature.

is a term applied to a child whose height is 2 standard deviations (SD) or more below the mean for children of that sex and chronologic age (and ideally of the same racial-ethnic group). This corresponds to a height that is below the 2.3rd percentile. Short stature may be either a variant of normal growth or caused by a disease.

The most common causes of short stature beyond the first year or two of life are familial (genetic) short stature and delayed (constitutional) growth, which are normal, nonpathologic variants of growth. The goal of the evaluation of a child with short stature is to identify the subset of children with pathologic causes (such as Turner syndrome, inflammatory bowel disease or other underlying systemic disease, or growth hormone deficiency). The evaluation also assesses the severity of the short stature and likely growth trajectory, to facilitate decisions about intervention, if appropriate.

How to determine if growth is normal

Hormonal regulation of human growth involves the growth hormone (GH)-insulin-like growth factor-I (IGF-I) axis.          There is also clearly a genetic contribution to human growth. This is discussed further under normal (parental    growth    and development history) and abnormal growth patterns (Turner syndrome and SHOX deficiency). GH is important in promoting somatic growth and in regulating body composition and muscle and bone metabolism. Some of these GH effects are direct actions whereas others, specifically linear growth, are mediated through IGF-I.

A newborn’s size is determined by its intra-uterine environment, which is influenced by maternal size, nutrition, general health, and social habits, such as smoking or drinking alcohol. Thus, an “overnourished” mother can have a heavier and longer baby and an “undernourished” mother can have a lighter and shorter baby than otherwise dictated by family growth genetics. The average weight of a newborn is 3.25 kilograms (7.25 pounds) and the average length is 50 centimeters (19.7 inches). After birth, the linear growth rate becomes more dependent on the infant’s genetic background.

Important physiological phenomena, known as catch-up and catch-down growth, occur in the first 18 months of life. In two-thirds of children, the growth rate percentile shifts after birth until the child reaches his or her genetically determined height percentile.

Some children (born too small because of uterine fetal constraint) move upward (catch-up) on the growth chart because they have tall parents, whereas others (oversized at birth because of excessive maternal nutrition during the pregnancy) move downward (catch-down) on the growth chart because they have short parents. By 18 to 24 months of age, most children’s stature has shifted to their genetically determined percentiles. Thereafter, growth typically proceeds along the same percentile until the onset of puberty

Determination of the MPTH is a critical first step in the assessment of a child’s stature, and obtaining accurate parental height measurements is essential when determining the MPTH. A large proportion of parents who bring their children for a consultation with a pediatric endocrinologist make a significant error in reporting their own heights. Since parental height often determines the extent of a work-up and/or therapeutic intervention, it is the opinion of the authors that parents’ heights should be directly measured whenever possible.

The MPTH is a child’s projected adult height based on the heights of his or her parents. Sex-specific calculations are shown in Table 2. For both genders, 1.7 inches on either side of the calculated MPTH is ~1 SD while 3.3 inches on either side is ~2 SD. By calculating the percentile and range for the MPTH, it can be determined if a child is growing on a percentile that is within or outside this range.

Here are some key points about short stature. More detail is in the main article.

Stature is a hereditary trait and controlled by both genetic as well as environmental factors.

The best “test” is to monitor your child’s growth over time using the
growth chart.

Six months is a typical time frame for older children; if
your child’s growth rate is clearly normal, no additional testing may be
needed. 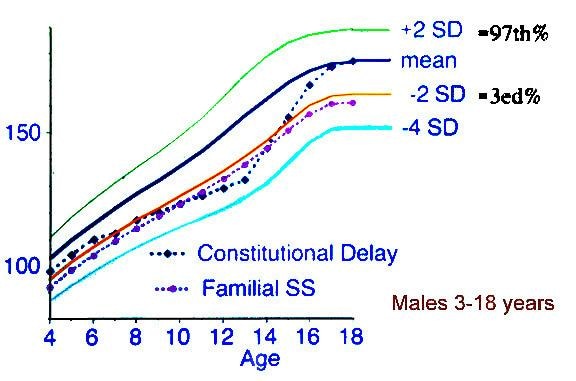 In addition, your child’s doctor may check your child’s bone age
(radiograph of left hand and wrist) to help predict how tall your child will
be as an adult.

Blood tests are rarely helpful in a mildly short but healthy
child who is growing at a normal growth rate, such as a child growing
along the fifth percentile line. However, if your child is below the third
percentile line or is growing more slowly than normal, your child’s doctor
will usually perform some blood tests to look for signs of one or more of
the medical conditions described previously. 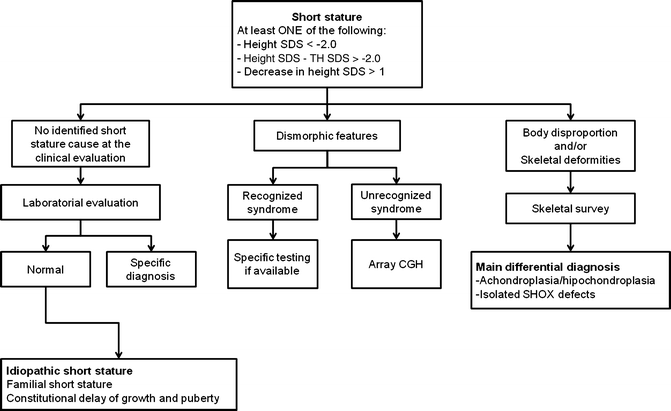 Evaluation warranted if HV low for age or growth pattern deviates significantly from the MPH target.

Once referred to endocrinologists, decisions regarding treatment depend on physician and family perspectives on: 1) whether short stature is a disorder or disability warranting medical treatment and, if so; 2) whether the therapeutic goal should be faster growth during childhood or a normal, increased, or maximum attainable adult height; 3) responsible use of resources, and concerns about long-term safety.

The rationale for treating childhood short stature includes increasing height and alleviating psychosocial disability while maintaining favorable risk/benefit and cost/benefit ratios. Selection among management options may therefore depend on the degree to which each meets these goals.

Surgical care depends on the underlying cause of short stature. Brain tumors that cause hyposomatotropism may require neurosurgical intervention, depending on the tumor type and location . Limb-lengthening procedures have been performed but carry enormous morbidity and mortality risks and are not recommended. Another treatment available is an aromatase inhibitor, which blocks the enzyme that converts testosterone into estrogen. Estrogen is what causes growth plates to close in both females and males.

We typically use this treatment in male adolescents who developed quickly and their growth plates are going to close quickly or are late bloomers who may run out of time. Again, this treatment won’t make a boy taller than he should be, but it’ll buy more time so he can grow to his full potential.

If a child has delayed puberty (a girl doesn’t have any sign of breast development by age 12-13 and a boy hasn’t had any sign of testicular enlargement by age 13-14) we can give the child a short (4-6 month) burst of estrogen or testosterone, which stimulates puberty and growth. A child who is simply a late bloomer will typically develop and grow in response to this treatment alone. If they respond well, then the treatment will be discontinued, and they will be followed to see how they grow.